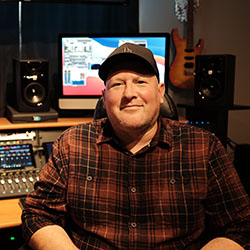 Matthew Gionet is the Owner of EarWorm Sound and a 20 year Audio Post Production professional.  Starting his career in 1998 growing from a childhood love of sound, he started out with the Media Diploma Program at Capilano University in North Vancouver, where he went onto do a practicum at Airwaves Sound Design in Vancouver.

For 10 years, Matthew polished his skills and knowledge working on hundreds of projects in video gaming, animation, movies and commercials.

In 2011, Matthew moved back to his home town of Campbell River where he began EarWorm Sound working remotely on thousands of projects for clients Internationally.

When not designing cool sounds, Matt can be found spending time landscaping, fishing with his son and hanging out with his wife and his dog “Max”. 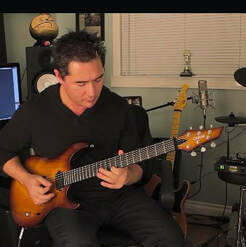 Andrew Oye is an award-winning composer from British Columbia, Canada. He has had his music featured in shows like Transformers 3,  Californication, Dexter, Lost, CSI, The Office, Sons Of Anarchy, Hotel Transylvania 2, Hawaii Five O, Pretty Little Liars, and countless others.

Since the early 2000’s Oye’s music has been also featured on every major network, and heard by hundreds of millions.

Andrew and Matthew have worked on numerous projects over the years dating back to 2011 and Andrew is EarWorm’s goto Music Composer and Music License provider.

Some of my earliest memories are of recording sounds off the radio onto cassette tapes, and learning editing with the double cassette deck on my boom box.

My life has been full of recording, creating, and sharing my own filter of sound through field recording trips around the world, getting folks dancing through my DJ sets, creating new galaxies of sound in games, or setting off into dreamland with my electronic compositions.

My work in being a sound designer for the game industry has been inspired by the enjoyment and excitement I felt when playing on early consoles, and the many nights spent at the arcades of my youth.

When I began working in the industry I enjoyed the challenge of making audio systems work across many platforms with so much localization, and saw the technical challenges as my new holy grail.

I have always enjoyed the way I heard the sound signatures of games, and getting to work on asset creation for Sonic Boom : The Rise of Lyric was a treat after having the soundscape in my head for decades. 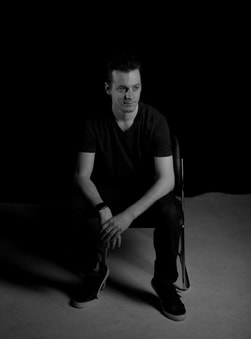 Tyler is an award-winning Sound Designer from British Columbia, who is best known for his work in Video Games and Movies.

Recording and creating sounds is a lot of fun, playing with sound is extremely satisfying, and storytelling through sound is emotionally moving.

I want to bring that fun and enjoyment and emotional depth to users and viewers. If I can use sound to affect a person’s understanding of their world or game and project, then I feel I’ve done my job.

It’s not just about “making a sound for a game element”, but making the game, story, film, or other projects feel real.